Simple and productive tools for modern forestry. Designed by operators, for operators.

Based in the municipality of Hankasalmi in central Finland, TMK Energiakoura manufactures tree shears and related attachments for excavators, tele handlers, log loaders, agricultural tractors and other machinery. TMK Tree Shear’s innovative guillotine shears and the powerful attachments we offer for them have attracted a great deal of interest both in Finland and internationally, and shears have been delivered to over 40 countries. All our products are designed and manufactured entirely in Finland from the highest-quality materials. 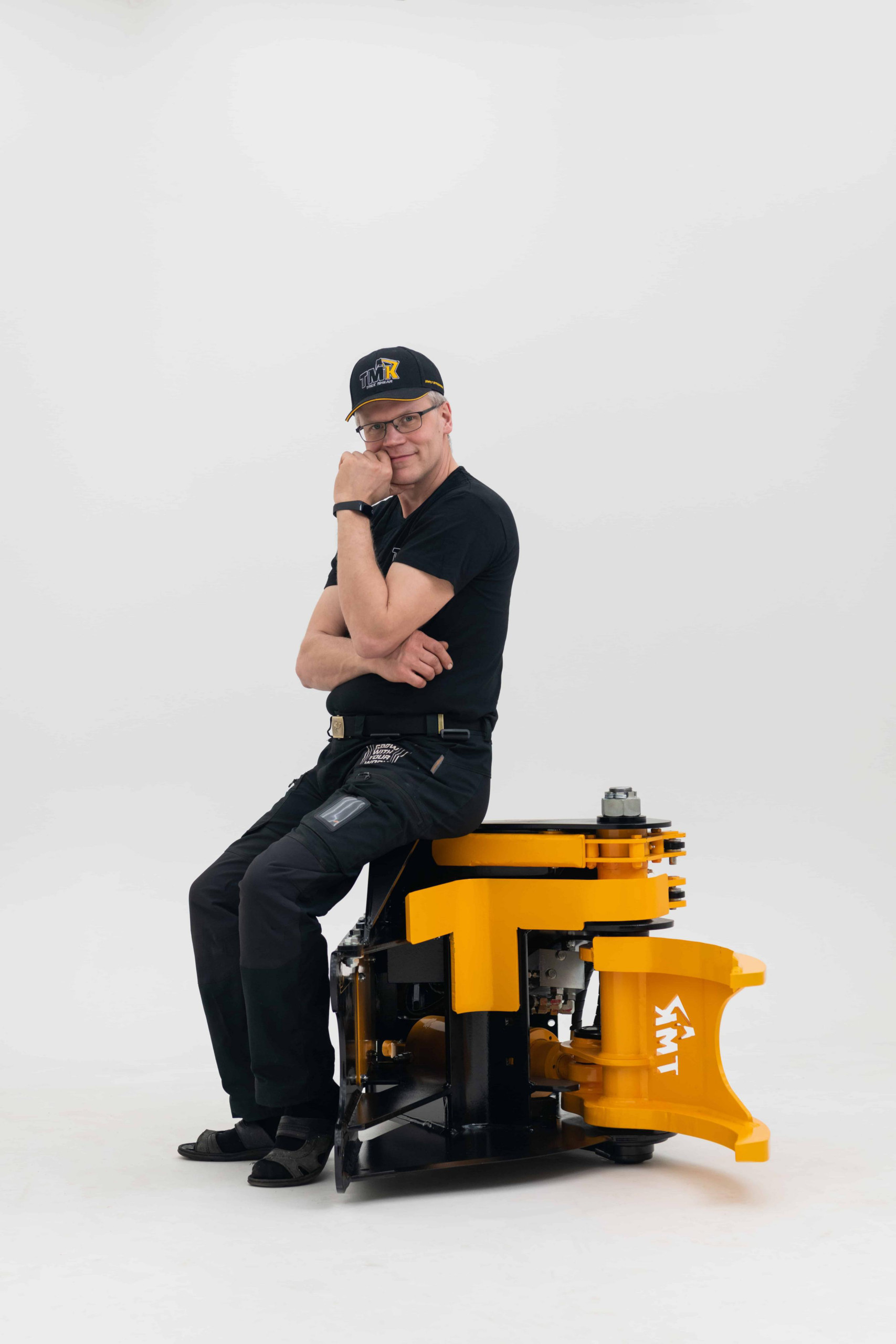 THERE MUST BE A BETTER WAY!

It’s September 2009, and the temperature is rising in the forest in Hankasalmi, southern Finland. No, it’s not because the country is enjoying an Indian summer, but because entrepreneur Tenho Koponen’s blood is beginning to boil. The tree shear he bought earlier that year is broken yet again, and now Tenho has decided that enough is enough. There has to be a better and more efficient way to do forestry work! But there would be no sense in going back to the days of the chainsaw.

So, to solve his troubles, in the late fall of 2009 Tenho Koponen sets in his workshop to design and build a completely new tree shear with just one moving grapple arm. It had to be as simple, durable and efficient as possible, with a structure that minimises damage to trees that are to be left standing as well as minimising unproductive labour. Thus was born a prototype of the world’s first guillotine shear with just one moving grapple arm, the TMK 300. Success? Well, kind of; it lasted about half an hour when put to work in the forest. Back to the drawing board, then! After a bit more trial, error and improvement, Tenho had a shear on his machine that was surprisingly handy for thinning with a zero tail swing excavator.

Once he saw the benefits of his new invention in his own forest thinning work, Tenho realised that others might also need such a powerful shear. He called on his father-in-law Reijo, a retired designer, who soon set about measuring the new shear and sketching out the first draft for developing the design.

Tenho’s brother Mika, who is a design engineer and now employed full-time by TMK, put the duo’s sketches into digital form. In the spring of 2010, Tenho drove with his first version of the shear and the drawings for the developed model to Multia, a municipality in central Finland not too far from his home in Hankasalmi. His destination there was the contract machinery manufacturer Multimek. Before long, an agreement was made for the manufacture of five shears for testing. Videos of the emerging new product were posted on YouTube, and several energy wood contractors in Finland became interested in what would be a low-cost and user-friendly new type of shear.

Today, all TMK’s shears are manufactured in series at the company’s own factory in Hankasalmi. This allows fuller control over the manufacturing process – quality can be monitored more precisely, and increasingly tailored solutions can be developed for the needs of different market areas.

Improvements have of course been made along the way, but the basic design of TMK’s shears is still the same as it was when it first saw the light of day back in 2009. In other words, the song remains the same: the company offers heavy-duty shears that makes forestry management more productive and easier. But our product development never stands still: TMK Tree Shear is continuously developing new, even more user-friendly solutions that challenge current operating methods and models and bring further benefits for entrepreneurs.

TMK’s ambition is not only to provide high-quality innovations for forestry work, but also to lead the way in energy wood contracting, forest management and tree clearing.

THE STORY OF TMK

Grow with your work

“A simple man can’t make things too complicated.” This remark by TMK’s CEO Tenho Koponen guides our work to this day. Ease of use was foremost in mind when designing the shear, and we want it to be equally easy to install and maintain. We guarantee that anyone who understands even a little bit about hydraulics and electricity will be able to install the shear and any of its numerous attachments.

The desire to learn new things, innovation and perseverance drives us to constantly develop new products. As the contracting work projects became bigger and bigger, new features were also required of the shear. This led us to develop attachments for it that make working easier – and above all, more productive. Thanks to its extensive range of attachments and easy adaptability, TMK Tree Shear is one of the most versatile tree shears on the market.

In June 2017, two new models were introduced at the Elmia Wood fair in Sweden: the TMK 200, which is smaller than the original TMK 300, and the larger TMK 400. In the autumn of 2020, we launched the MultiGrab, a multipurpose tool which helps cut working costs and brings together the best features of the various excavator attachments.

TMK’s vision for the future is to further expand our product range by paying close attention to what our customers need. By investing vigorously in product development, we have succeeded in providing innovative solutions for the tree clearing sector, and our goal is to continue to be on the crest of the wave of development in the industry.

See the attachments
Designed by operator, for operators

The TMK Family – a global network of operators

Since then, TMK has grown from a one-man side project to a pioneering company that is highly regarded both in Finland and internationally. A vast amount of contractors and farmers around the world appreciate the efficiency, ease of use and durability of our shear. When you purchase a TMK shear, you become part of the global TMK family. In addition to Finland, there are already users who swear by TMK’s name from South Korea to the United States and Norway to New Zealand. The community is particularly active on Facebook, where they have their very own TMK Operators group. True to TMK’s values, the operators share their experiences of our products and working with them, and enjoy the feeling of being part of the same active community.

TMK has an established distribution network in the Nordic countries, Central Europe and North America, among others, and more and more new export channels are being opened around the world. Our goal is to become one of the best-known and highly valued manufacturers in the industry worldwide.

“I live in central Finland, and I was originally an earthmoving contractor. I also have a farm, and forestland where the restoration of the young forest wasn’t going well.During the winter when I should have been able to work in the forest, there was too much snow there. Also the excavator was standing idle in the yard.

I set out to think about how I could solve the problem of not being able to do my work. This resulted in the new type guillotine shear, an innovation that makes working not only more efficient but also easier and more pleasant.”

We will be happy to help you find the right shear and attachments for your needs. Contact us!

Would you like to be part of a pioneering company that is bringing the best in Finnish forestry technology to the world? Check our job vacancies, or feel free to send an open application!

Feel free to contact us and we will be happy to tell you more!

We use cookies on our website to give you the most relevant experience by remembering your preferences and repeat visits. By clicking “Accept All”, you consent to the use of ALL the cookies. However, you may visit "Cookie Settings" to provide a controlled consent.
Accept All Cookie Settings
Manage consent

This website uses cookies to improve your experience while you navigate through the website. Out of these, the cookies that are categorized as necessary are stored on your browser as they are essential for the working of basic functionalities of the website. We also use third-party cookies that help us analyze and understand how you use this website. These cookies will be stored in your browser only with your consent. You also have the option to opt-out of these cookies. But opting out of some of these cookies may affect your browsing experience.
Necessary Always Enabled
Necessary cookies are absolutely essential for the website to function properly. These cookies ensure basic functionalities and security features of the website, anonymously.
Functional
Functional cookies help to perform certain functionalities like sharing the content of the website on social media platforms, collect feedbacks, and other third-party features.
Performance
Performance cookies are used to understand and analyze the key performance indexes of the website which helps in delivering a better user experience for the visitors.
Analytics
Analytical cookies are used to understand how visitors interact with the website. These cookies help provide information on metrics the number of visitors, bounce rate, traffic source, etc.
Advertisement
Advertisement cookies are used to provide visitors with relevant ads and marketing campaigns. These cookies track visitors across websites and collect information to provide customized ads.
Others
Other uncategorized cookies are those that are being analyzed and have not been classified into a category as yet.
Save & Accept